Toast Hawaii is a super simple German nostalgia food at its best, invented in the 50's by bringing together pineapple, ham and cheese on toast. As a kids favorite food, we made it all the time growing up in Germany.

What is Toast Hawaii?

Toast Hawaii is an open-faced ham and pineapple sandwich that's topped with American cheese (yes, you can buy the popular individually wrapped sliced in Germany, too), then baked in the oven. It has been one of my favorites as a kid growing up in Germany, and our kids love it, too.

I love spreading a homemade garlic butter on mine and I use fresh pineapple instead of the more traditionally used canned pineapple. While it's name is Toast Hawaii, I have never heard of it in America. It desperately needed to be a featured recipe on the blog!

Toast Hawaii was invented by German chef Clemens Wilmenrod in the 1950's and is super popular throughout Germany as a quick dinner. It is most definitely a household staple for my family, too. Whenever my Mama Ute was looking to whip up something quick and delicious, Toast Hawaii was often the answer.

Traditionally a maraschino cherry filled the hole of the pineapple ring, but I don't remember my mom ever filling it with a cherry (I am not a huge fan of them either). Instead, I fill the holes with some little Peruvian pickled peppers, adding a sweet and subtle spice to this otherwise already perfect dish. Again, this is just something extra that I came up with, and that we never did growing up.

Here a short video showing you how to make Toast Hawaii. You'll see just how easy it really is!

Next time you're in the mood for a little weeknight Hawaii getaway, try it this recipe and let me know what you think in the comments below!

Also try my Chicken Schnitzel Hawaii if you're a ham and pineapple lover, and for other easy meals that kids will love, some favorites are Frikadellen (German hamburgers) and Kartoffelpuffer (German potato pancakes). 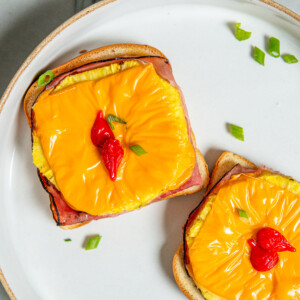 Toast Hawaii is a super simple German nostalgia food at its best, invented in the 50's by bringing pineapple, ham and cheese together on toast. As a kids favorite food, we made it all the time growing up in Germany.
5 from 2 votes
Print Recipe Pin Recipe
Prep Time 10 mins
Cook Time 20 mins
Total Time 30 mins
Course Dinner, Lunch, Main Course
Cuisine German
Servings 4 servings
Calories 493 kcal

Maraschino cherries are traditionally used as a pop of color when making Toast Hawaii, although my mom never used them. Instead I use pickled Peruvian peppers as I love the sweet taste with a hint of spice. You can also use nothing in the middle of your Toast Hawaii and I promise it will taste just as great. Using canned pineapple is just fine for making Toast Hawaii, however I love using fresh for mine and I think it really adds to the overall taste of this dish.