Spätzle are THE German noodle. Homemade, quick, yummy, they're a typical companion with many traditional German meals. It's either spätzle or Knödel (German dumplings - click for potato or bread dumpling recipe here) as the starchy side, and usually red cabbage for the vegetable when we're talking sides to serve with a festive roast or "Braten" for the holidays. My grandma used to usually just let some butter melt into her Spätzle after cooking them, and that's how they would end up on the table, but today I decided to turn them into a Fall feast and make them the star of the show! A fun way to play with the flavor profile of spätzle is by adding in sautéed vegetables like mushrooms into the batter, which will then be cooked right into the noodle. And that's exactly what I did, but I didn't stop there of course. I also had my mushroom spätzle mingle with beer braised brussel sprouts, crisp bacon, pine nuts, lots of gruyère cheese and finished it with a drizzle of truffle infused olive oil. Now that's a meal!

As if spiced apple wasn't already a great flavor, try mixing it with the expertise of a 350-year-old German distillery that's been producing yummy honey liqueur and decided to pair that with American bourbon whiskey to make a child called "Bärenjäger Honey Bourbon." I honestly don't even like bourbon, but this is absolutely delicious (try mixing it in with tea, too! Yum!). I found a cocktail called Golden Apple that pairs perfectly with my Fall Spätzle that you just have to try! Find out where it's available in the United States. 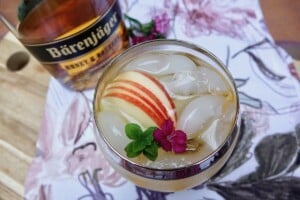 Shake all ingredients and strain in a tall glass over fresh ice. Garnish with a few apple slices. Zum Wohl!

Up Next: Spice Plum Marzipan Tart

I cannot get enough of the seasonal Fall fruits, and especially plums have my full attention right now! Imagine spiced plums nested in flaky, buttery pie crust covered in sweet marzipan.. that's what's coming up next and you believe me, you don't want to miss it! To not risk missing out, make sure you are subscribed to receive my weekly emails with new recipes!

Also, if you ever think of a German recipe you don't already see on my blog, please PLEASE leave me a comment or send me a message! I am always looking for inspiration!

Some German Basic Recipes You Need To Try: