This crispy-chewy, SUPER EASY bacon and onion Flammkcuchen recipe is popular by the names of Elsässer Flammkuchen or Tarte Flambée. My favorite type of Flammkuchen originated in the once-German region of Alsace in France (in German 'Elsass'), hence the name Elsässer Flammkuchen. This flatbread is a quickly made snack, appetizer, or entrée. It's common to eat a whole Flammkuchen by yourself (and I prefer not to share, either!). 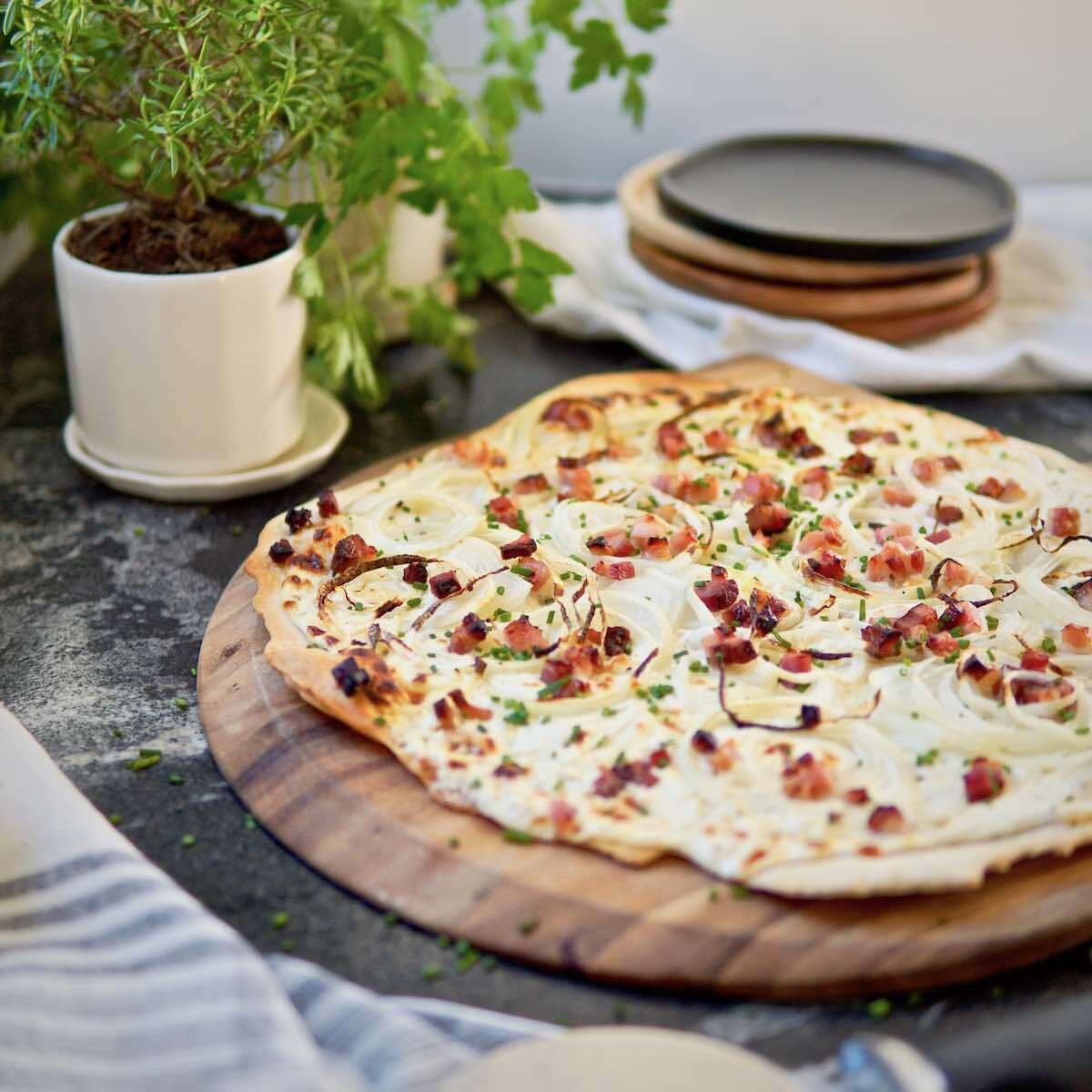 How to Make Flammkuchen 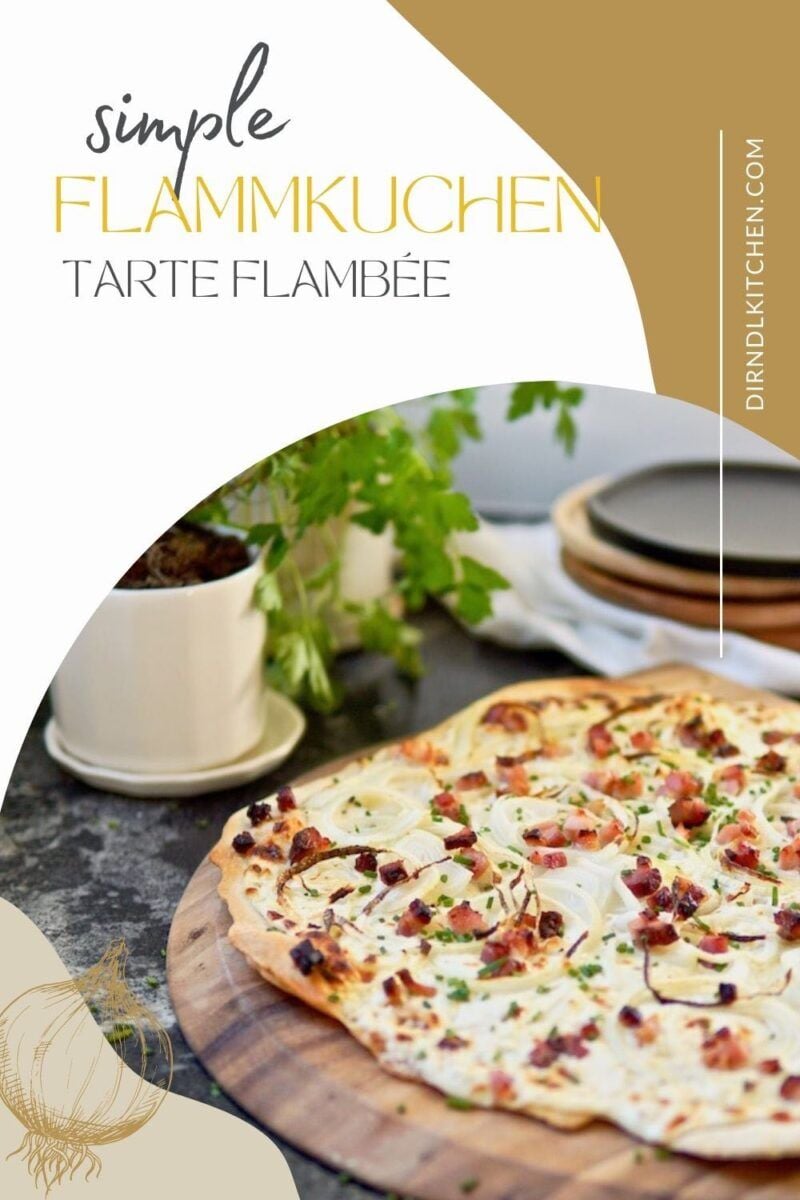 Flammkuchen is super popular throughout Germany and making Flammkuchen is surprisingly simple! Knead the dough ingredients until you have a workable, smooth dough (you may need to add more water or flour). Whisk the sour cream and whipping cream ingredients for the sauce. Slice up some onion and bacon and bake. Und fertig (and done)! All you need are the following ingredients and tools. Few ingredients mean the better the quality, the better the results. Here are a few notes:

Where is Elsässer Flammkuchen from? 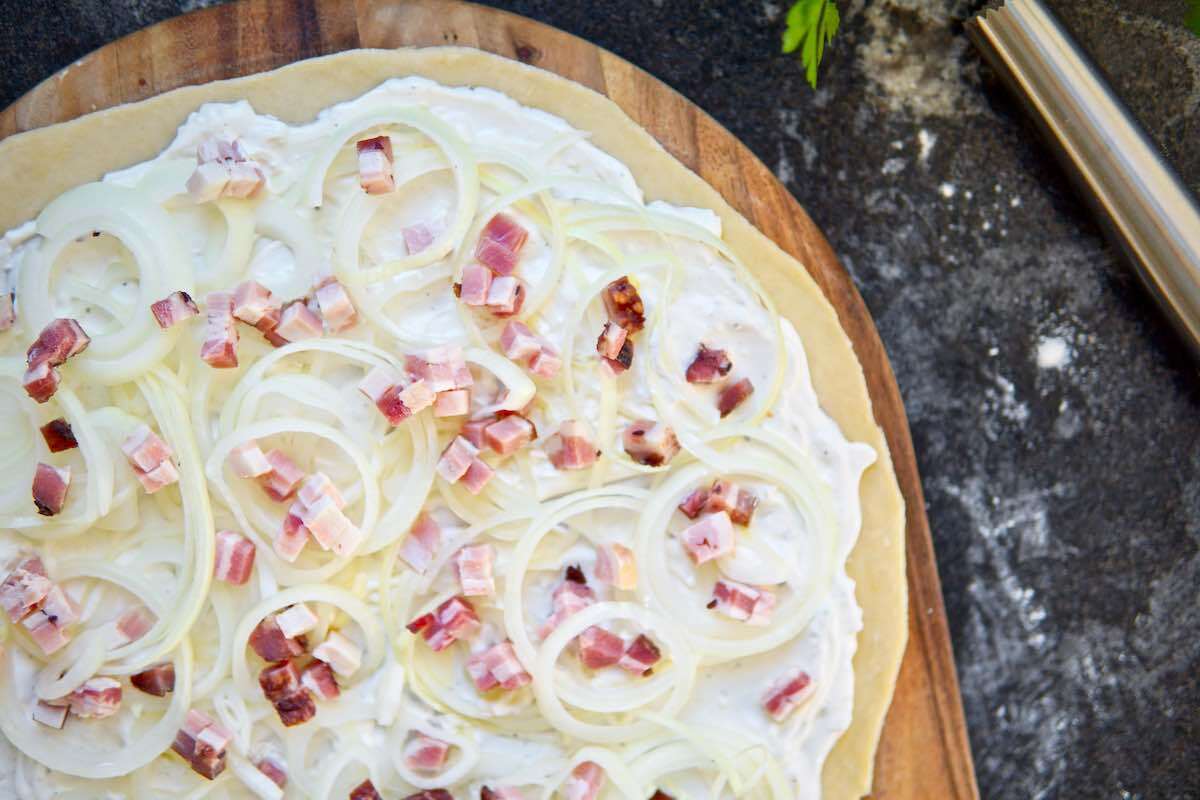 The name gives you the biggest hint. This particular type of Flammkuchen recipe is from the French region of Alsace (or Elsass in German). This disputed region at times belonged to Germany and is close to the German border. You'll notice lots of German architecture and German language there and I have loved the many trips to the beautiful Straßburg (or Strasbourg in French) growing up in Trier, Germany! Alsace or Elsass is now part of a combined region called 'Grand Est' in France and Strasbourg was named the capital of that region in 2016. Flammkuchen is also extremely popular in many varieties (I linked a few below) all throughout Germany, but Elsässer Flammkuchen is by far the best known type. You don't have to travel to Strasbourg or Germany to eat Elsässer Flammkuchen though. You can easily make it at home using a few ingredients and it will taste just as good as if you were in France! 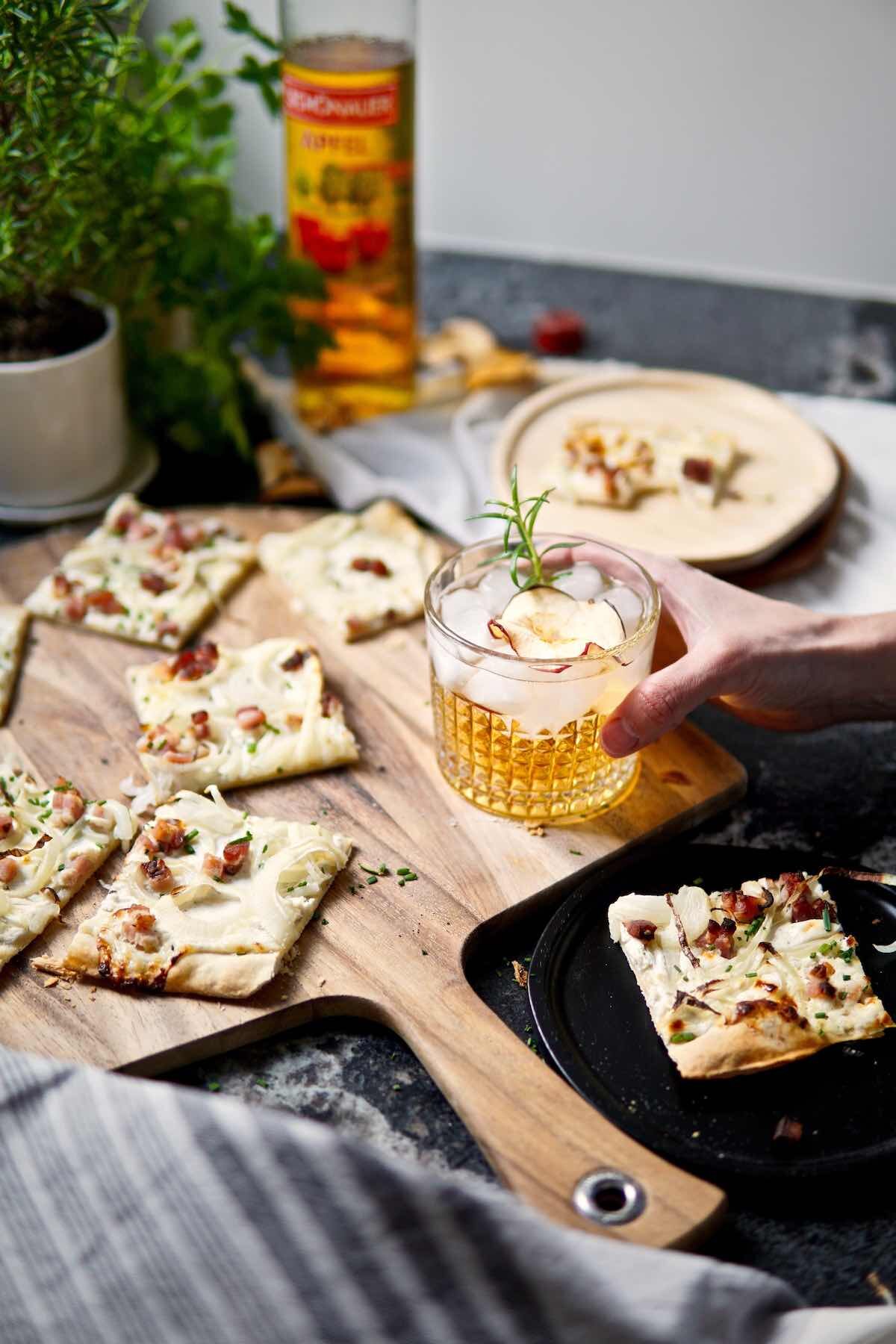 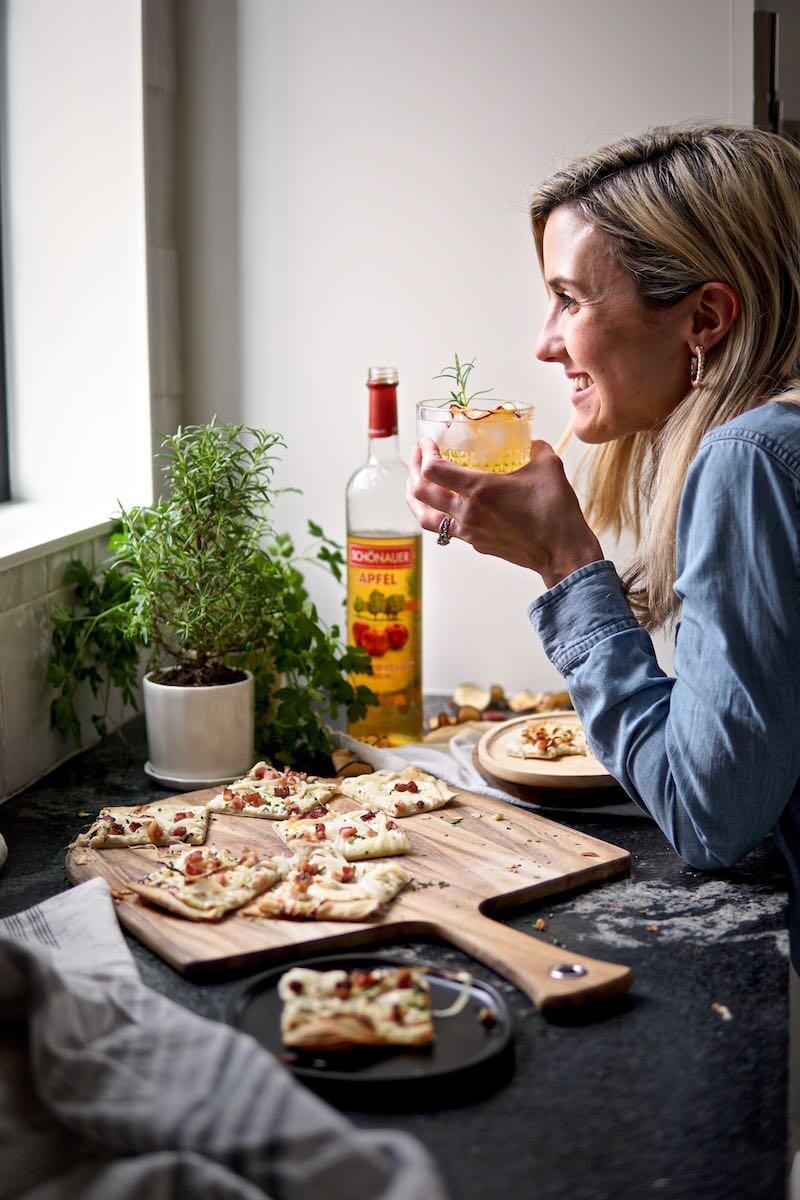 Viez-Sprudel (German apple wine mixed with sparkling wine) would be my go-to drink pairing for Flammkuchen. However, since apple wine is basically nowhere to be found in the US, I have experimented just a bit to make this simple Apple Spritzer cocktail inspired by that exact combination. The Schönauer Apple Liqueur (made from real German apples of course) adds just the right amount of sweetness and apple flavor to this drink.

Over ice, combine 1 ounce of vodka with 1 ounce of Schönauer Apfel and 2 ounces of sparkling water. Give it a couple of stirs, then garnish with an apple slice and fresh herbs (optional). Prost! Find out where Schönauer is available by visiting this link. 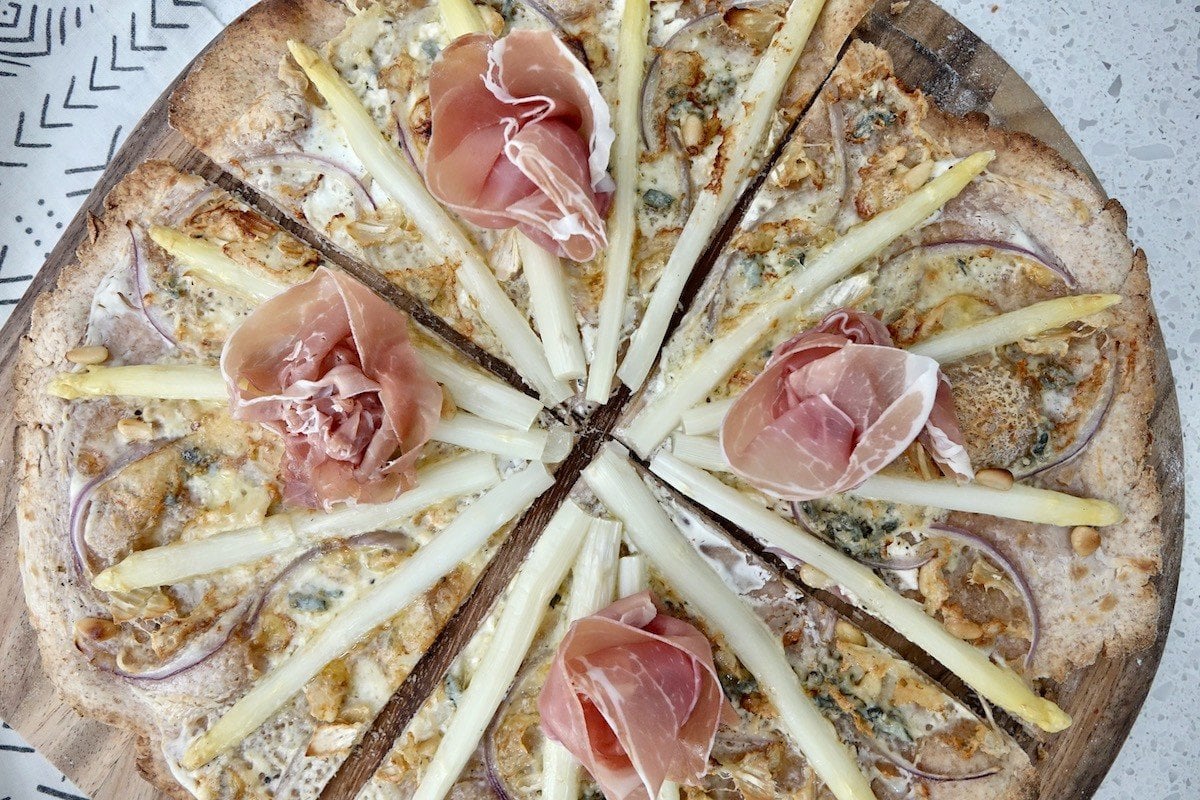 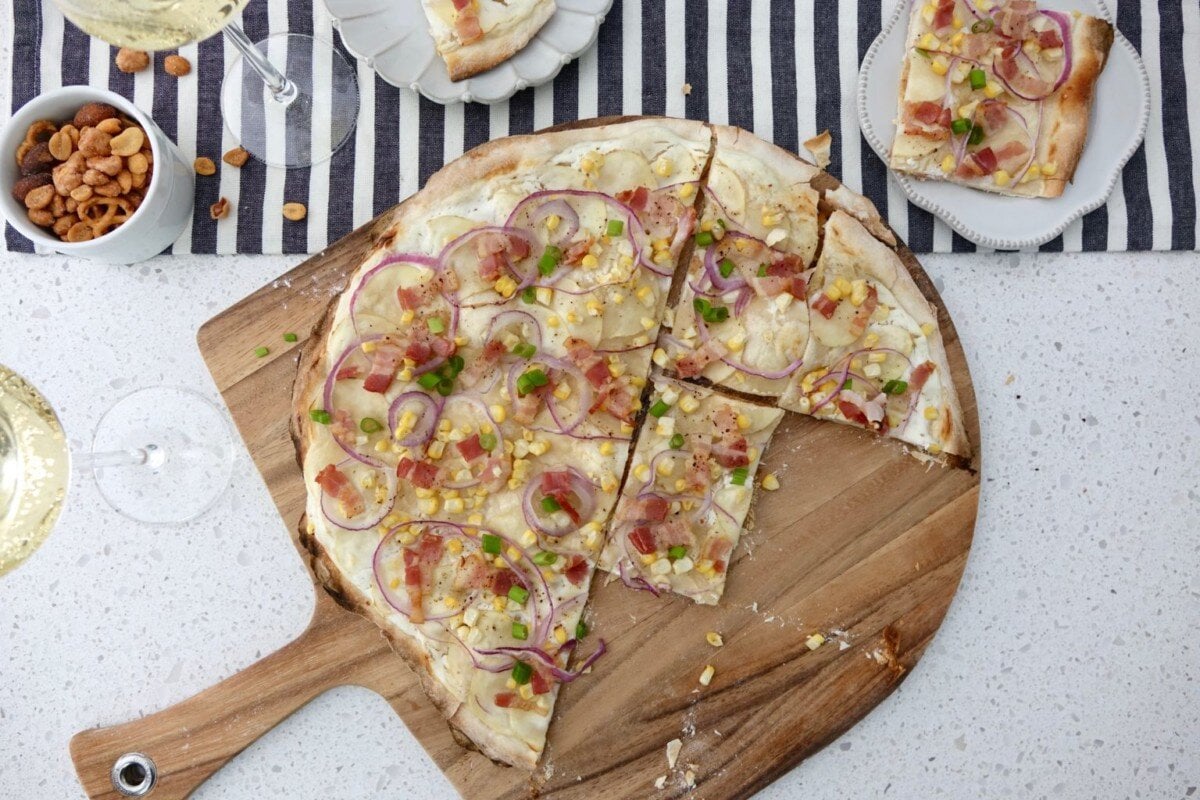 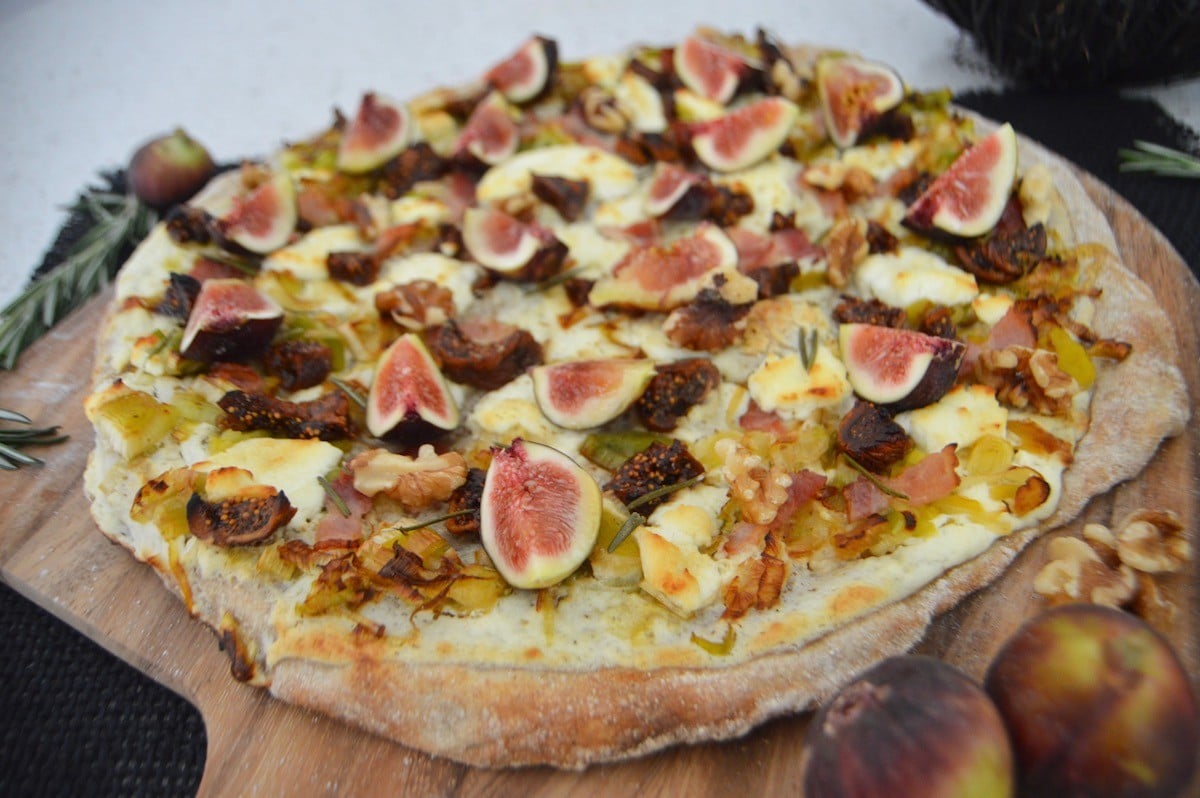 Thank you for stopping by my blog! Please stay awhile, drool over some delicious German food, leave some feedback and ideas in the comment section below, and subscribe to receive weekly emails with new recipes! Next is one of my favorite recipes! Simple, crust-less German cheesecakes made quickly in German weck jars! They're perfect as individual desserts for Valentine's Day! 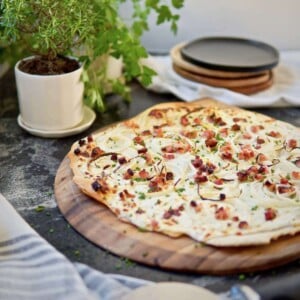 This crispy-chewy, SUPER EASY bacon and onion flatbread is popular by the names of Elsässer Flammkuchen or Tarte Flambée. My favorite type of Flammkuchen originated in the once-German region of Alsace in France (in German 'Elsass'), hence the name Elsässer Flammkuchen. This flatbread is a quickly made snack, appetizer, or entrée. It's common to eat a whole Flammkuchen by yourself (and I prefer not to share, either!).
4.72 from 7 votes
Print Recipe Pin Recipe
Prep Time 15 mins
Cook Time 20 mins
Total Time 35 mins
Course Appetizer, Baking, Dinner, Entertaining, Lunch, Main Course, Snack
Cuisine Elsass, French, German
Servings 1 Flammkuchen
Calories 2272 kcal

While typically in Germany one Flammkuchen serves one person, this one easily serves 2. You could also make this recipe into 2 smaller Flammkuchen instead, so each person can enjoy their individual ones.

I received compensation from Marussia Beverages in exchange for writing this post. Although this post is sponsored, all opinions, thoughts and recipes are my own. This post contains affiliate links, which means that I may be compensated if you click certain links.