The simple, delicious things of Fall. Plums to me are totally understated in my opinion and I absolutely cannot get enough of them. Whether that's giving them a swift sauté in the skillet and serving them over oatmeal or pancakes or shaking them up with some spices and brown sugar to make a cocktail, I will never get tired of them (and the season is too short to get tired of them anyways!). Today's post was inspired by my grandma's Zwetschgenkuchen, which is a simple yeast dough cake covered with plums and baked on a sheet pan, then served cut into squares. Instead of a yeast dough however, I made a simple flaky, buttery pie crust instead (using my hands only and following "Inspired Taste's" fool proof pie crust recipe), and then added a layer of marzipan almond paste (which I purchased at Whole Foods) and brown sugar and spice marinated plums. The recipe is so simple, you'll want to keep this recipe close and make this on repeat and once plums exit the season, substitute with apricots, apples, cherries, you name it. That's the beauty of tarts.

Plums find their ways into drinks, too! Serbians are fanatics of Slivovitz - a plum brandy that accompanies a meal either before or after dinner. Bistra makes a really great Slivovitz that I used for my spiced plum cocktail today. I used the same spices as for the spiced plum tart and created a rim with it, cut up some plums, covered them in more sugar and spice and shook it all together with the brandy in a shaker and then strained it into a martini glass, and simply finished it with ginger beer for some zing and sweetness. Complete this form to find out about availability of Bistra Slivovitz plum brandy in your area. 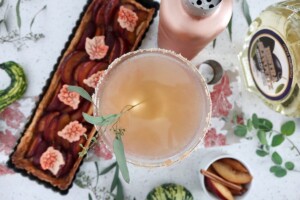 Combine spices and sugar in a shallow dish. Create rim by first dipping the edge of a martini glass into water and secondly into the sugar spice mixture. Transfer remaining spice and sugar mixture into a small bowl and toss with the cut up plums (if working ahead, they're even better after they've marinated for half an hour or longer). Shake for 3o seconds with ice, ginger beer and the plum brandy, then pour into martini glass. Cheers!

Next Up: Individual Onion Pies

Fall in the Trier region of Germany (where I grew up!) calls for a rustic onion pie and Federweißer - the latter being a sweet, young white wine that vintners sell locally at their wineries for a short period of time in the Fall. It's simply the best combination and you will want to not miss the recipes for the individual onion pies coming up as well as a wine cocktail to go along with it (since Federweißer is not easy to find in the US). To make sure you're not missing the recipe (or any other recipes in the future), your doctor advises to subscribe to receive my weekly emails with new German recipes!

I promise, it's what's best for you!

You will also need: