...there was a  wonderful German girl named Sophie that had engraved it in her brain that she would one day explore the fascinating country she only knew from movies growing up, the United States of America! What nobody told her was that most Americans don't eat and drink like Germans. So after moving in a straight shot from Germany to Kansas City in 2009, Sophie started first playfully out of pure boredom, and then more seriously to pursue her love for baking, which turned out to be a fun and equally frustrating hobby. Fun because Sophie loves creating yummy and pretty stuff, and she was able to find ways to turn her favorite German cakes (Rotwein Birne - or red wine pear, and Schwarzwälder Kirsch - or black forest cherry) into cute and tasty little cupcakes. Frustrating because Sophie is a perfectionist, and when things didn't turn out exactly the way she imagined (which they never did), she just couldn't be happy and confident about her work, especially if others were paying for it. What Sophie doesn't understand is that most people don't have an eye for all the detail she sees.. unless they are in the same profession of course. So rather than give up the baking completely, she had the genius idea to apply her skills and knowledge to creating a food blog, which would feature amazing German recipes that she would either steal from her grandma Sieghilde's German cooking directly or newly invent, given the fact that not all ingredients needed for German cooking and baking are always readily available in the United States. She then named her blog dirndl kitchen, inspired by the dirndl dress that is so popular for Oktoberfest in Germany (specifically in the German state of Bavaria)! 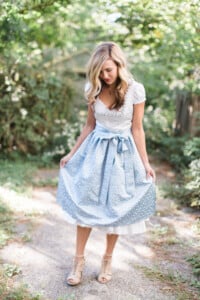 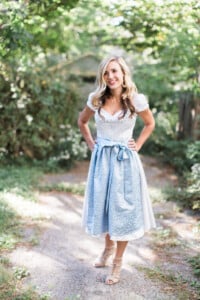 The only appropriate way to introduce myself to you is of course in a dirndl dress while holding a gingerbread cupcake! My very pregnant friend and blogger (her due date was 2 days ago!) Sarah Sweeney captured a few last minute shots of me in this lovely Alpentrachten dirndl dress shipped via dirndl.com directly from Germany in just 1 week! Now you know exactly what a dirndl looks like and where to buy one for yourself, and the only challenge and confusion remaining concerns the proper pronunciation of "dirndl!" But don't you worry because I will make sure to teach you in a video next week!

I am thrilled (or how we would say in German: überaus begeistert) to become your German helper when it comes to uncovering the mysteries surrounding German cooking, baking, culture (such as why  the very popular German chocolate cake NEVER EVER existed in Germany) and many other random facts and things taken from my wonderful upbringing in Germany paired with my adventurous, new life in the United States of America!

Also watch out for the next post arriving in just a few days! 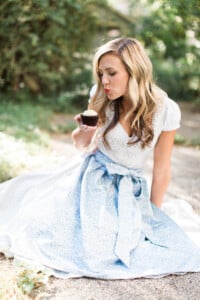