Making chicken noodle soup from scratch is easy and satisfying! This authentic German recipe is amazing for a few reasons. My homemade chicken stock made with whole chicken and soup vegetables including celery root, fresh ginger and leek is full of deep flavors that make this recipe stand out. I used store-bought German egg soup noodles for this recipe, which are fun and different. My kids say this is the best chicken noodle soup they've ever had!

Making homemade chicken noodle soup is super easy and so satisfying! You can make it from scratch using a whole chicken, whether it's frozen or refrigerated. I simply combine my chicken with water, salt, pepper, and bay leaf. Then I add fresh vegetables like a whole onion cut in half with the peel on, roughly chopped carrots, leeks, fresh ginger, and celery root (I love the slightly sweeter notes of celery root compared with the commonly used celery stalks).

This is an authentic, German chicken noodle soup recipe that I love so much for its unique flavors! After cooking the chicken and vegetables, you will strain the soup, toss the sad-looking veggies and shred the chicken. I used store-bought German egg noodles for this soup that my grandma used for soups all the time. This saves you some time and dirty dishes and makes this soup feel even more like home to me.

The noodles are cooked separately, so they don't get mushy when sitting in your fridge as leftovers. When warming up the soup, I add more veggies such as peas, sliced carrots, little cauliflower or broccoli florets, and fresh parsley (or chives). I then serve it with cooked noodles and shredded chicken. This is the best chicken noodle soup you'll have, perfect for those cooler months with anti-inflammatory benefits, and I promise not just your kids will love it!

What type of noodles to use

I use German store-bought egg noodles that Germans use specifically for soup recipes. They look like short angel hair pasta and my kids just LOVE them. They're also the same type of noodles that my grandma used for all sorts of German soup recipes such as this German smoked ham soup called Kasslersuppe. They save you an extra step and extra dirty dishes. However, if you'd like to make your egg noodles, go for it! I think even homemade spätzle (a German homemade egg noodle) would work great in this soup.

There are a few simple, but powerful ingredients you will need for my German recipe of homemade chicken noodle soup.

How to store it

I like keeping all of my soup ingredients such as the broth, chicken meat, noodles, and vegetables separate, so nothing gets mushy and gross while sitting in the fridge, waiting to be reheated. You can store these your chicken noodle soup ingredients for up to 5 days in the fridge. If you have leftover stock, you can freeze it for up to a couple of months.

There is a reason why chicken noodle soup is the number one chosen soup when a cold or the flu hits. It is a powerhouse soup that has healing properties. There are minerals and proteins in the chicken that help with inflammation and combined with the vitamins in the cooked vegetables, this soup may have the ability to heal. Moreover drinking and eating hot foods helps loosen mucus, which is always helpful when you're clogged up. So next time you feel that sniffle coming on, prepare yourself with this simple, homemade chicken noodle soup recipe.

I don't frequently use my instant pot, BUT I love using it for soups! Not only does it cook the soup faster, but the pressure cooker function also helps preserve more taste (I swear!). Plus it's more energy efficient because cooking takes a third of the time. So next time that chicken noodle soup emergency hits, consider pulling out your pressure cooker. I cooked a FROZEN 5-pound chicken in just about 90 minutes in a pressure cooker and ended up with fall-off-the-bone meat and a super flavorful soup. The general rule is that you'll cook a frozen, whole chicken in 13 minutes per pound and a fresh, whole chicken in 6 minutes a pound. With each method, you're adding 15 minutes of natural pressure release time in the end.

Watch this quick one-minute video to help you know the steps to make the best homemade chicken noodle soup.

In the mood for some more German soup recipes? Check out my German pancake soup in homemade beef stock (LOVE IT!), my grandma's lentil soup, and authentic Hungarian Goulash soup recipes. 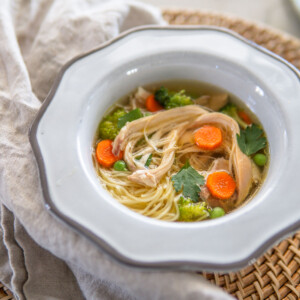