This lentil soup with veggies and hot dogs is a nutrient-dense, warming meal that's so filling and delicious and will feed a crowd on a budget! 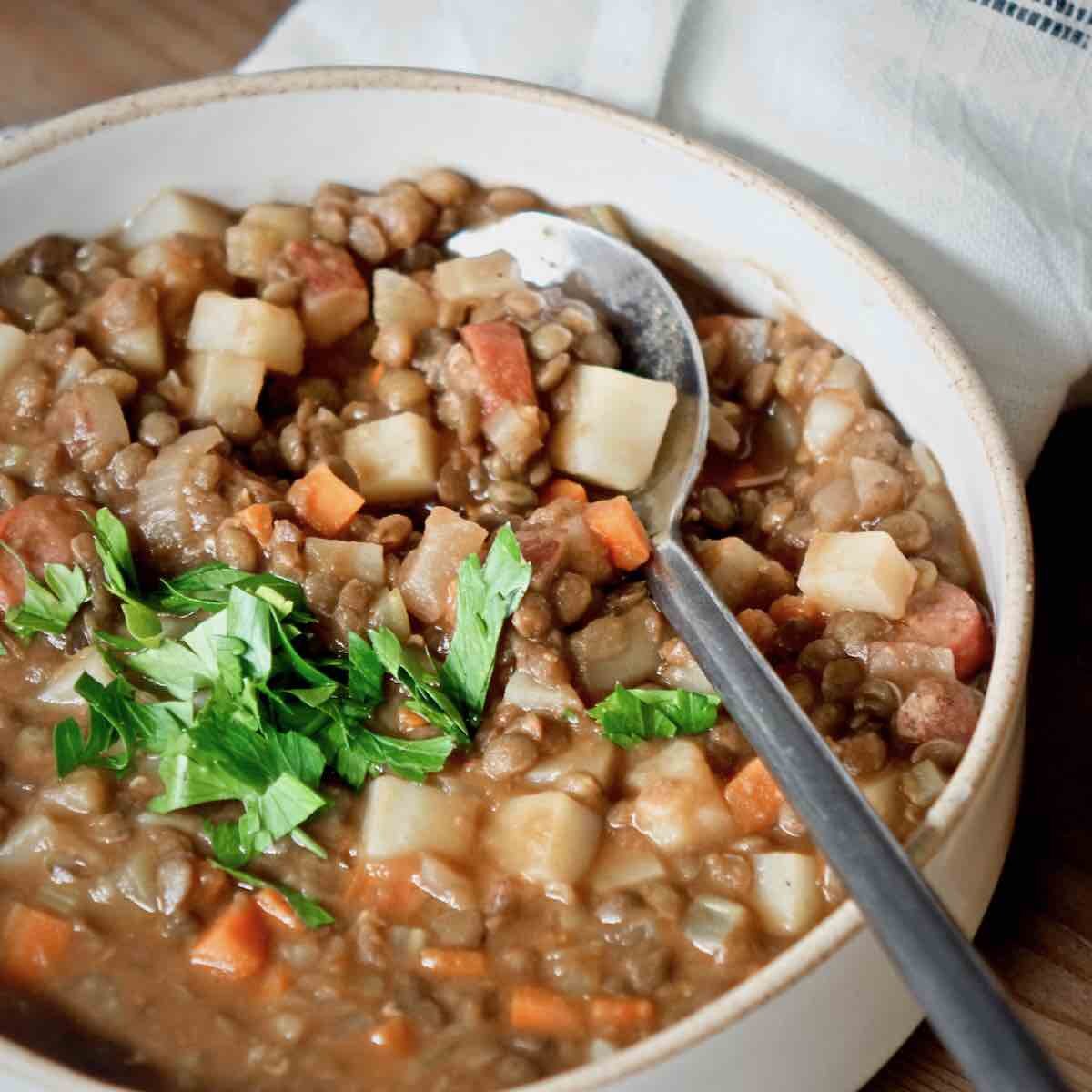 Linsensuppe with veggies is here for the win!

Linsensuppe aka lentil soup with veggies is one of those recipes my German soul craves when cooler weather hits! I don't know if that's my immune system requesting this nutrient-dense food as colds make their rounds, or if it's fall colors in a sense resembling a bowl of this soup, so then that's all that's on my mind. Either way, this German soup should be high on your weeknight meal list!

Are lentils common in German cooking?

Lentils are more common in German cooking than you think! I love lentils, as they remind me of my Oma Sieghilde (my grandma who was the inspiration for starting my German food blog). Her Spätzle mit Linsen recipe, another German classic, was one of the first-ever recipes I posted almost six years ago! It's still one of my favorites to date! You should check it out if you're a lentil lover! 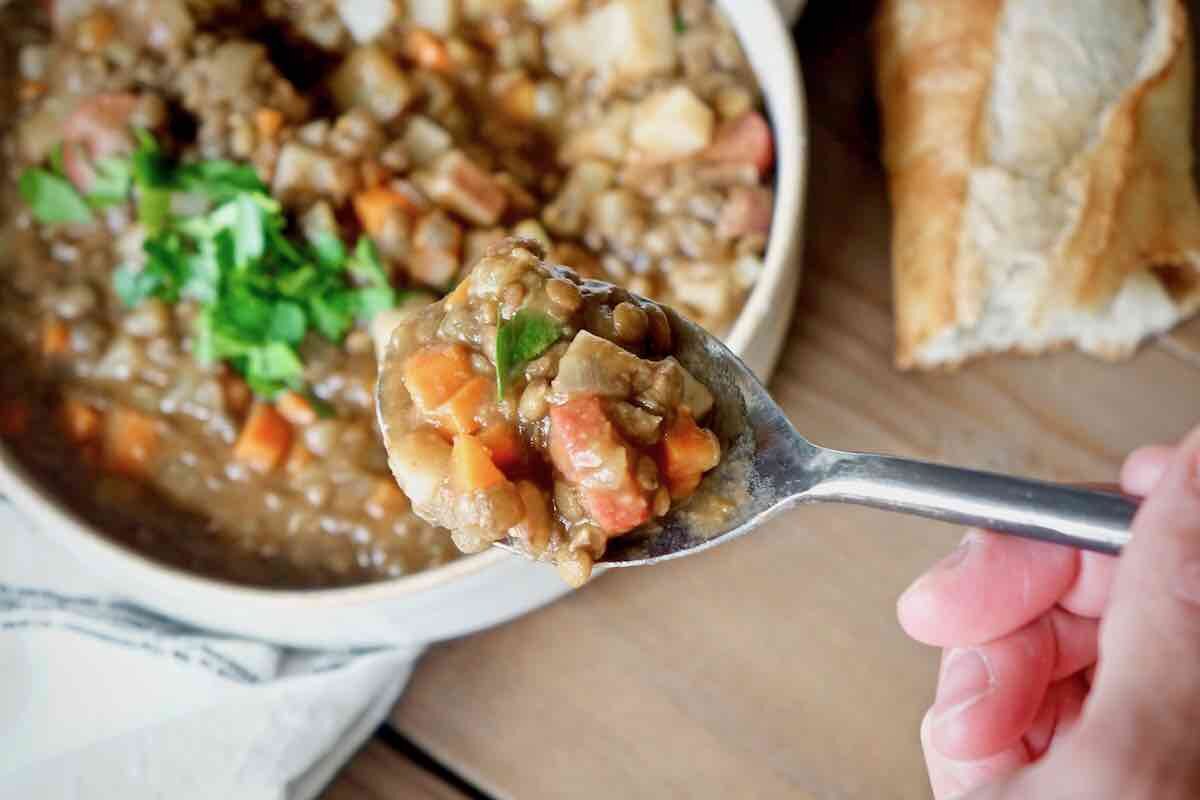 Back to the lentil soup with veggies that brought you here in the first place! Lentils are the star of this dish!
Other ingredients include:

The final touch: sliced Wiener Würstchen! But because I love avoiding unnecessary additives like nitrites, I went for an organic beef hot dog, which pairs perfectly with the heartiness of this soup! You could also add crisp bacon, pork belly or ham instead (or in addition). 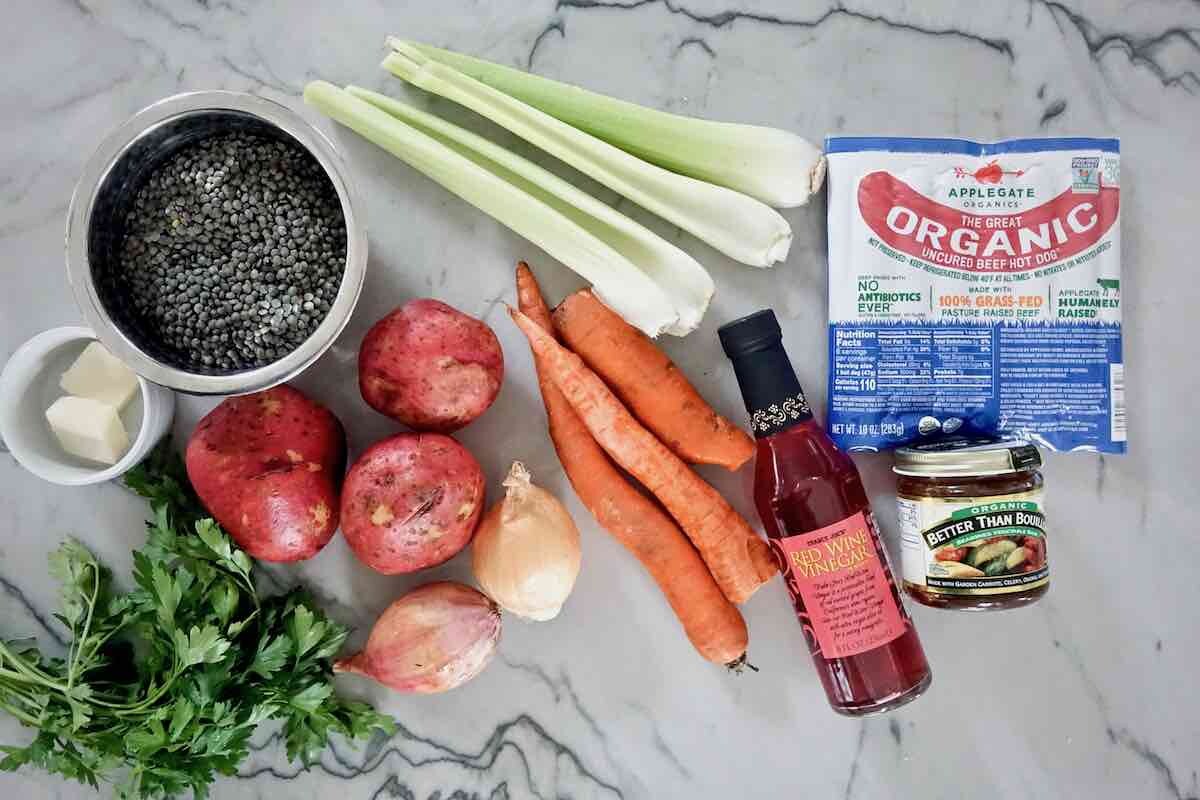 Is there a vegetarian lentil soup recipe?

You could totally omit to add any meat and stick to only veggie broth when preparing your soup for a vegetarian version of this classic German cold weather meal! Go one step further and replace the butter with oil, and you have yourself a vegan meal that's also naturally gluten-free! 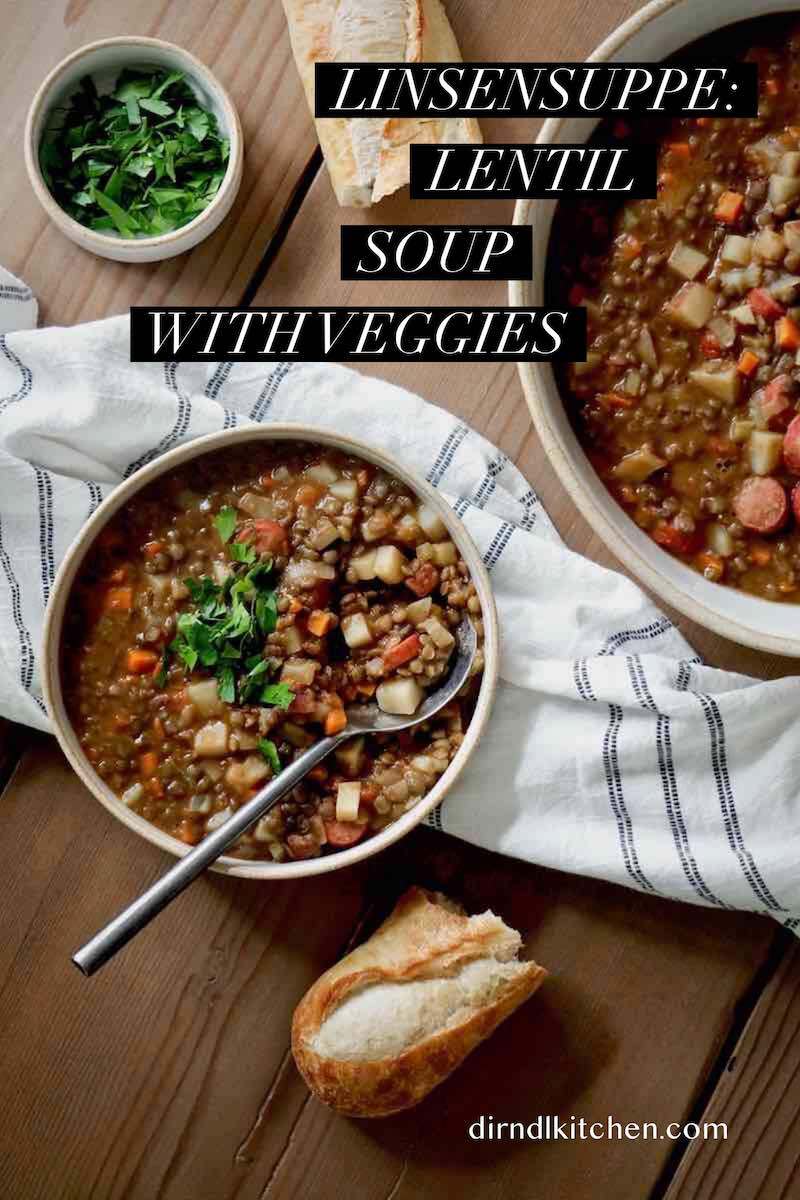 This lentil soup has so many veggies in it, making it more of a stew! A synonym to this Linsensuppe in German would be Linseneintopf, with the 'Eintopf' portion translating to 'one-pot.' Everything is added together in one pot, which is extremely convenient and easy to clean up later. Linsensuppe is the type of meal that goes from cooktop to table, often serving out of the pot it's been cooked in. I haven't yet invested in a Le Creuset pot (although it's been on my wish list for years!), but I have a feeling Eintopf would be more regularly on the menu if I could just place the pot I cooked with on our table. Fewer dishes equals a happy chef and more time with my family.

Can I use any lentils in lentil soup?

The short answer: I would NOT use red or yellow lentils. Red and yellow lentils break apart into indistinguishable mush, so they're great for purées without having to purée anything. Green lentils (the kind I used), brown lentils, and black lentils are a great choice, as they tend to keep their shape better when cooked. Lentils generally don't require any soaking and cook within 30 minutes, which is a great bonus! 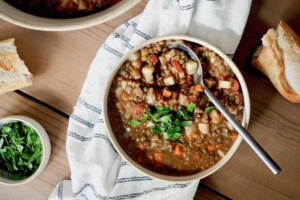 What makes lentils so good for me?

I love lentils for so many reasons! Lentils, a seed and a type of legume, are so rich in B vitamins, magnesium, zinc, potassium, and iron. I ate this lentil soup with veggies for three days in a row last weekend, and I am pretty sure that gave me the energy to get up at 5 a.m. every day this week to work on my blog (a new experiment I have been testing out)! They're also protein powerhouses! Roughly 25% of the composition of lentils are proteins, making them a great meat alternative. Have I given you enough reasons yet to make this German lentil soup? 🙂 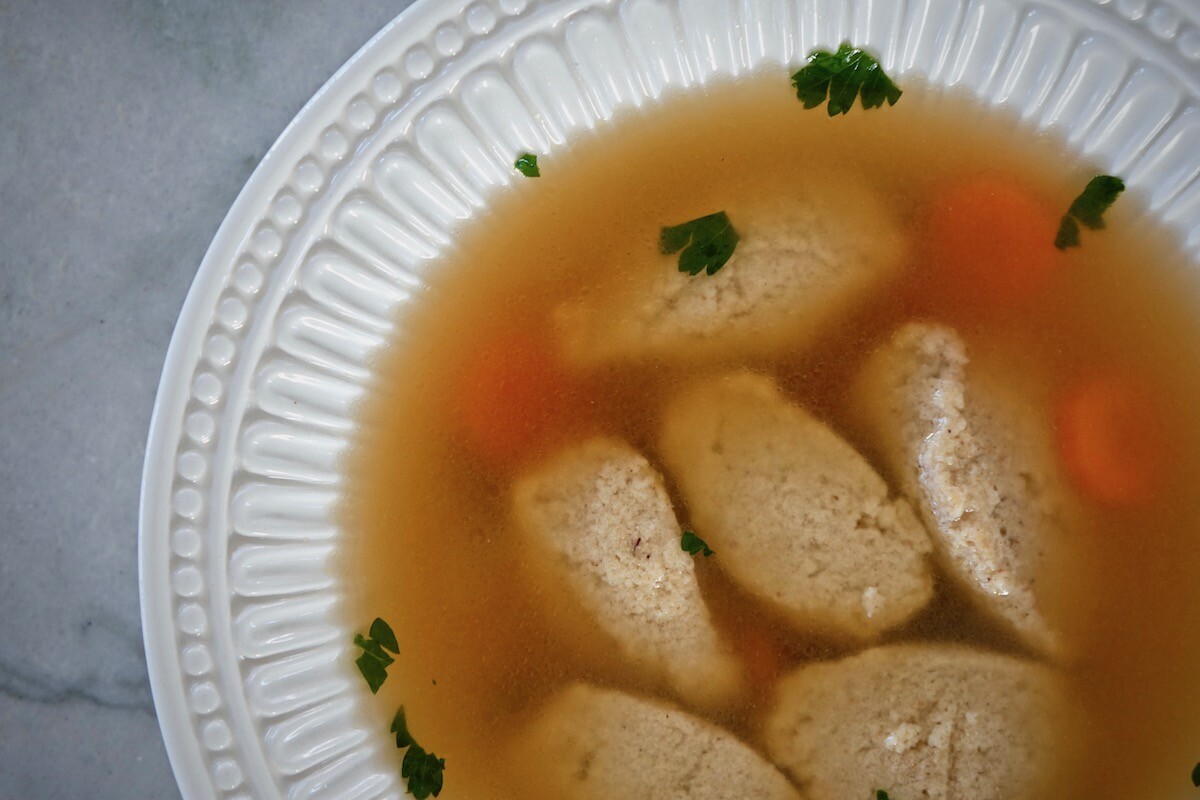 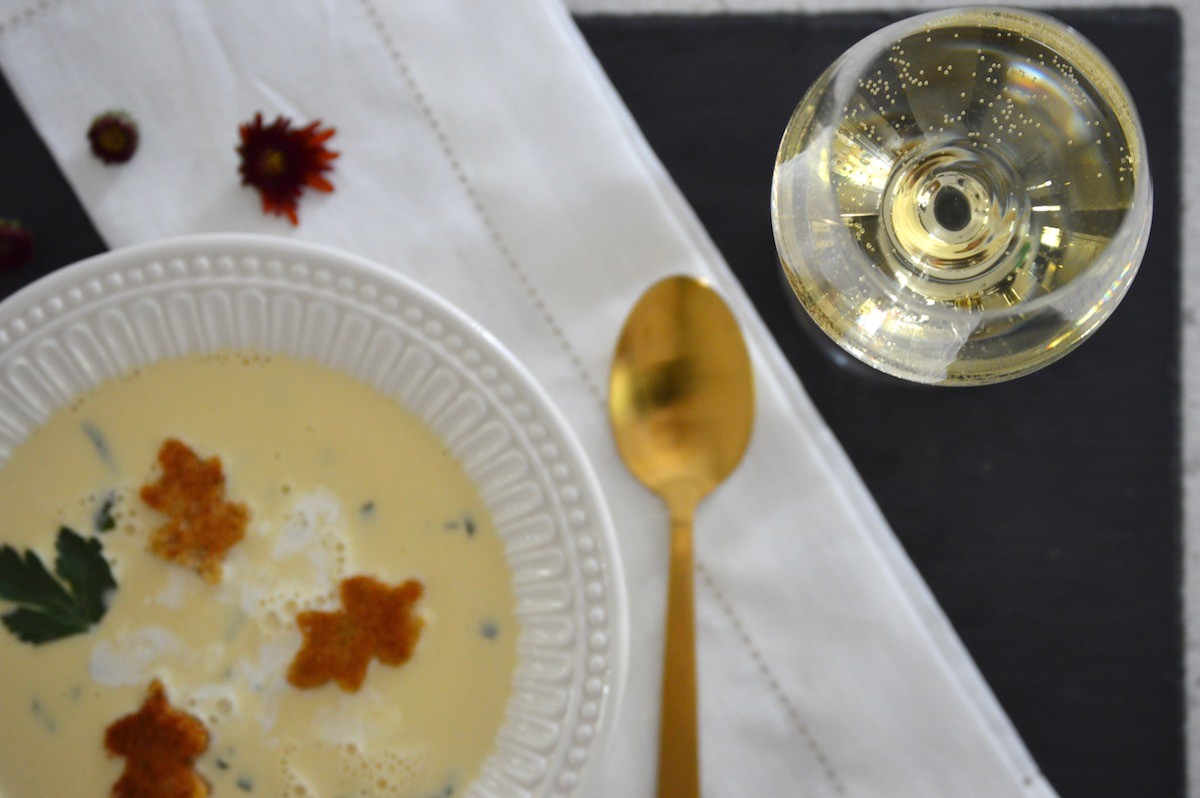 So I don't know about you, but it finally cooled down enough in Kansas City that we can bear to stand in front of a hot grill outside, meaning grilling season has started. This means Jason finally assembled us a Schwenkgrill, a special tripod swinging grill from the Saarland region of Germany. Up next is a recipe from the Saarland region called 'Verheiratete' or 'Married' in English. AND a DIY for your very own Schwenkgrill! Make sure to subscribe to my blog now, so you're not missing out when my new recipe goes live! 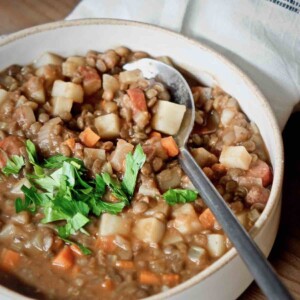