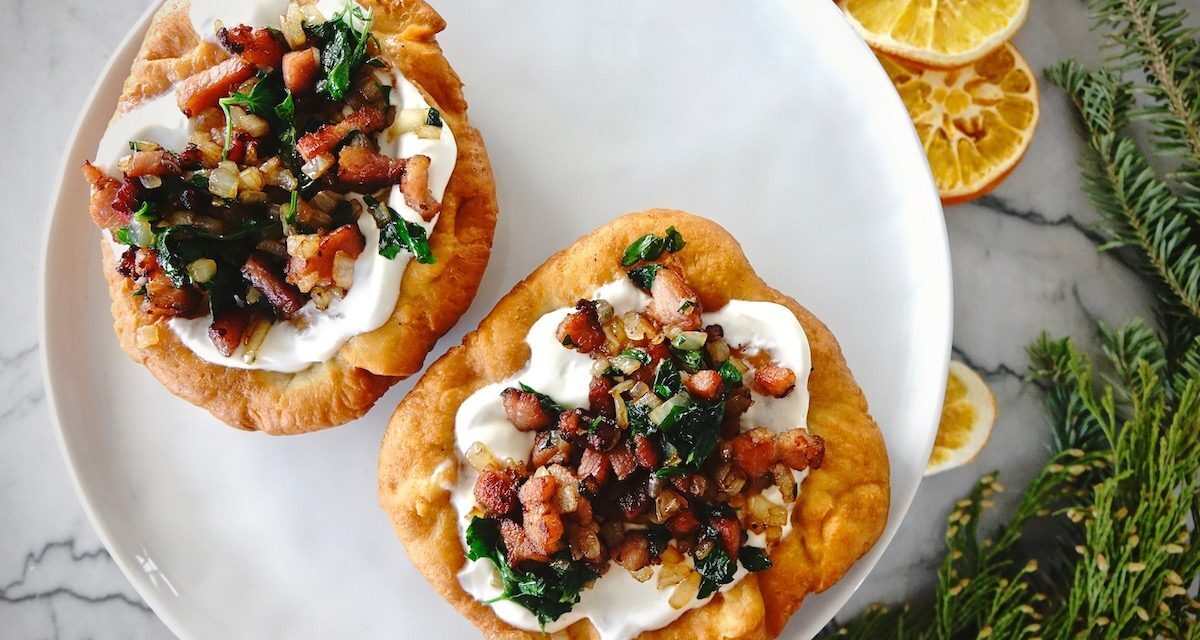 Try to pass by the Lángos (pronounced ‘lahng-gosh’) booth at a Christmas Market and not stop and at least let all the amazing smells soak in. It’s hard to resist these deep fried flatbreads of Hungarian origin. 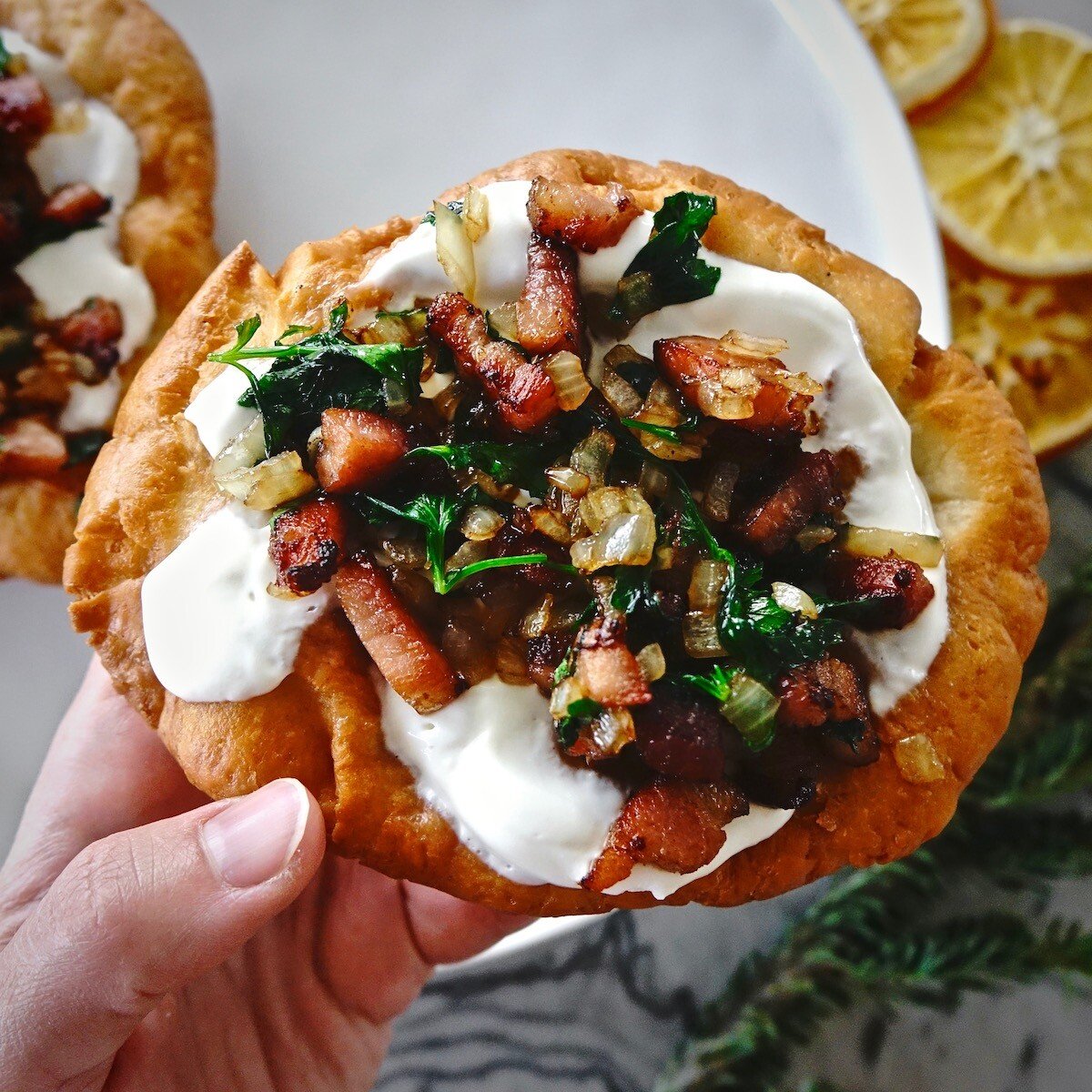 Oh the times of Christmas markets and strolling through Trier towards the Trierer Dom (the large Catholic Church in Trier’s city center) during Christmas Market time. The smells of roasted chestnuts, glühwein, candied nuts and potato pancakes in the air. And then I pass by one of the most heavenly smells there is… deep-fried dough topped with velvety sour cream and toppings; it’s the Lángos booth!

I talked to my Hungarian friend Szilvia the other day to make sure I understood the authenticity of the Hungarian dish I was going to bring to all of you. She said the most common way to eat Lángos, which she absolutely loves, is simply topped with sour cream and cheese (it would be similar to gouda she said). One other way she really enjoys it is topped with salt and garlic oil. Oh heavens! I am already so excited to try this next time! Lángos have gotten increasingly popular in Hungary’s surrounding countries, and they are a sure find at most Christmas markets. Szilvia also said Lángos are most popular during summer time, and can be enjoyed at lake bistros. What I would give to transport me to summertime at lake Balaton right now with a Lángos in hand! 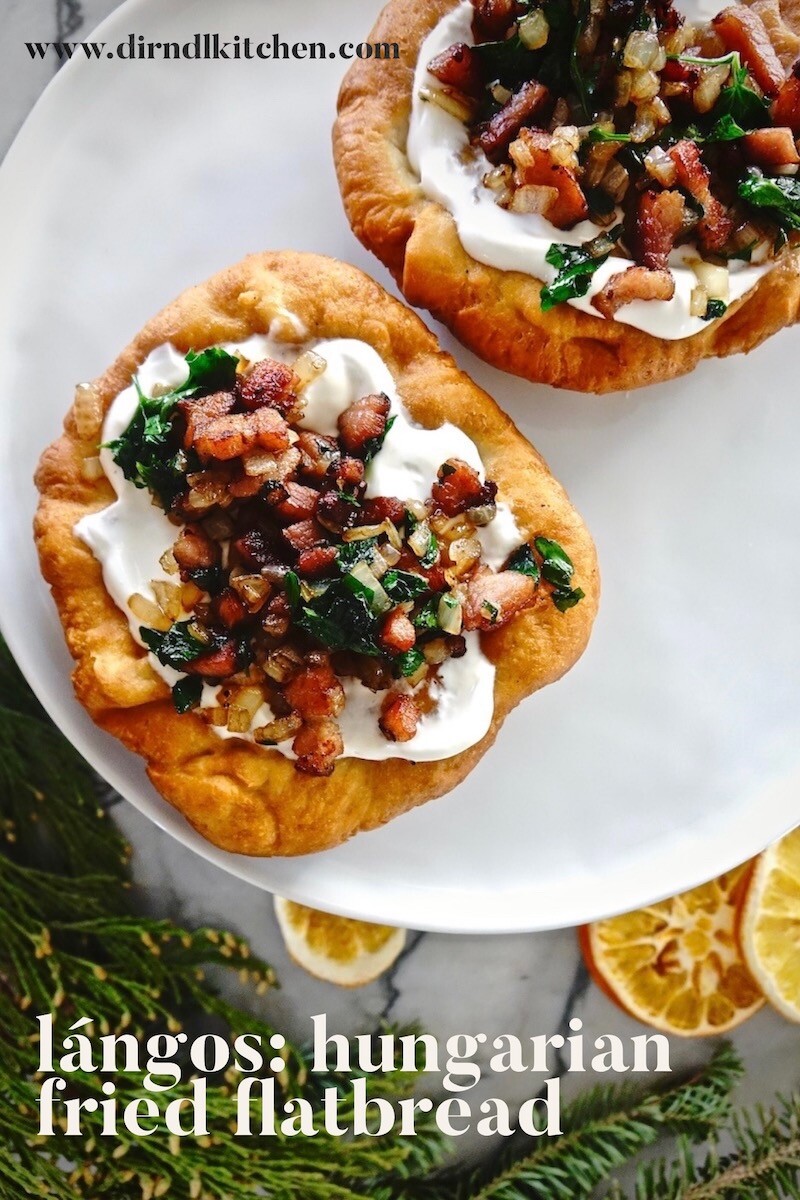 Today’s Lángos are inspired by Flammkuchen, the Alsace-style flatbread. After the dough is fried, I added sour cream and sautéed bacon, onion, garlic, stirred together with some fresh, chopped parsley. The only thing that could have made this even better is a fried egg, but that would of course steal from the authenticity and simplicity of this simple and so, so good Hungarian fast food. To me, Lángos are kind of like savory donuts and I love donuts so so much! They are really great at any time of day, although I would think they’d be most perfect for a casual lunch. There is nothing too complicated about this recipe, and if you don’t own a deep fryer like me, a pot of avocado oil (it’s also become my go-to oil for sautéing, but you can use any high heat oil) and a frying thermometer is all you really need. Do yourself a favor and make a batch of these right now. You can tell Szilvia and I ‘Danke’ later (she does speak German, but you could also say ‘Köszönöm’ in Hungarian).

Some people may say that white chocolate is not real chocolate, but I tend to disagree. And how could anyone want to argue with anything chocolate in the first place? This hot chocolate gets topped with a Mozart white chocolate whipped cream, more chopped white chocolate and crushed peppermint candy cane. Wowie, that’s good! Try it out and let me know what you think! 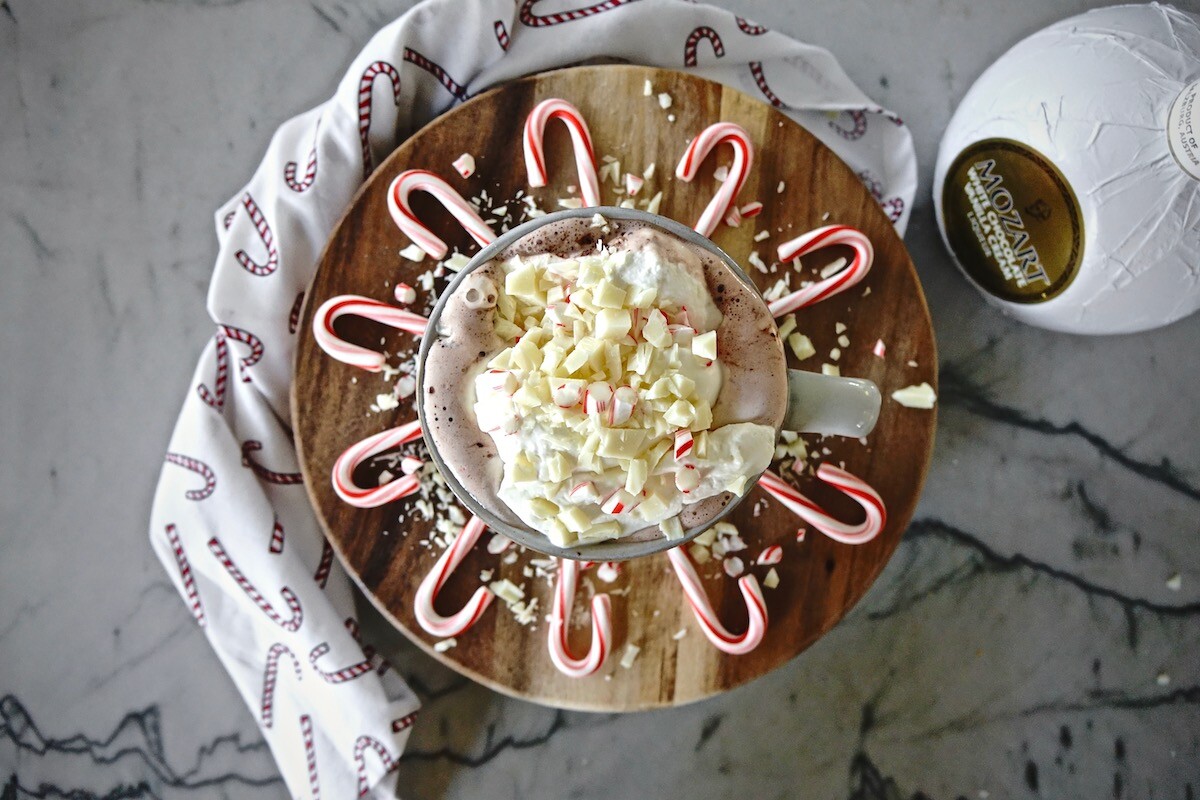 Beat the cream with the powdered sugar until stiff, then fold in the Mozart. Warm the milk and hot chocolate mix (feel free to add more Mozart here as well). Pour into mugs and top with whipped cream, then white chocolate and crushed candy cane. YUM! To find out where Mozart Liqueurs (also available in Milk and Dark Chocolate as well as Strawberry Cream and seasonally Pumpkin) is available in your area, fill out the short product finder form. 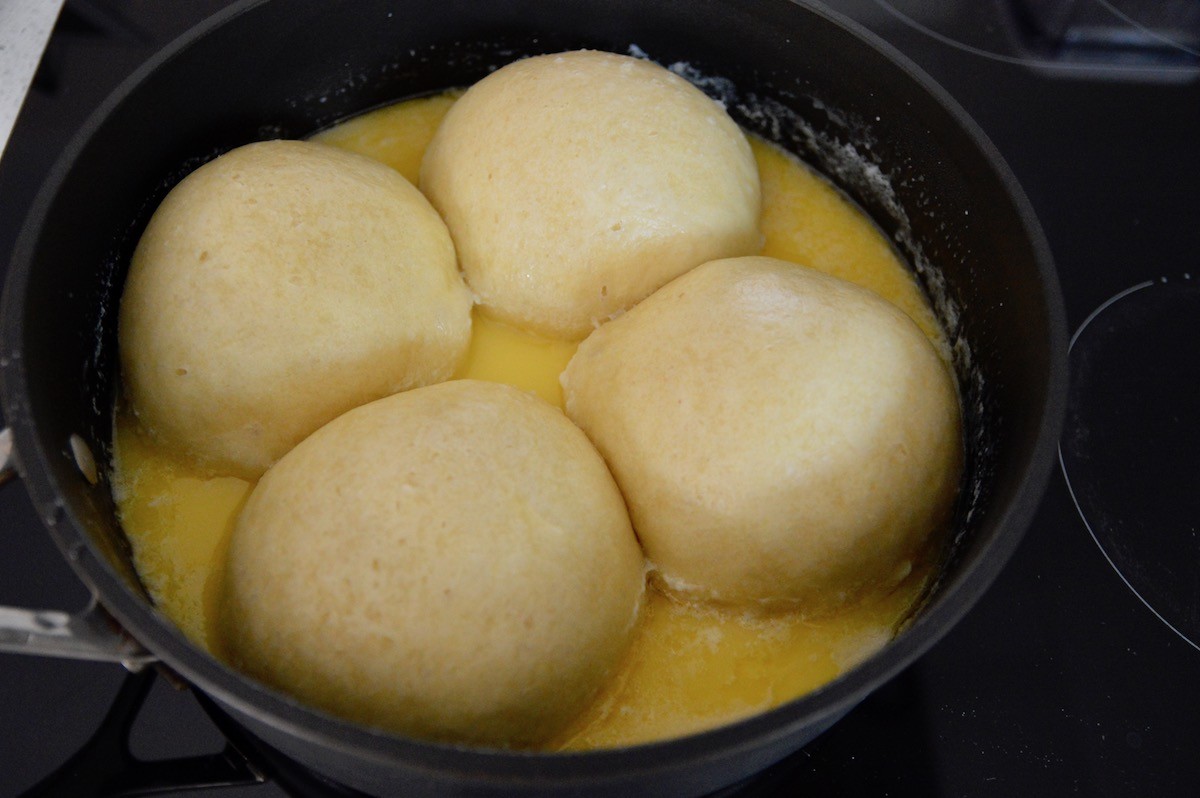 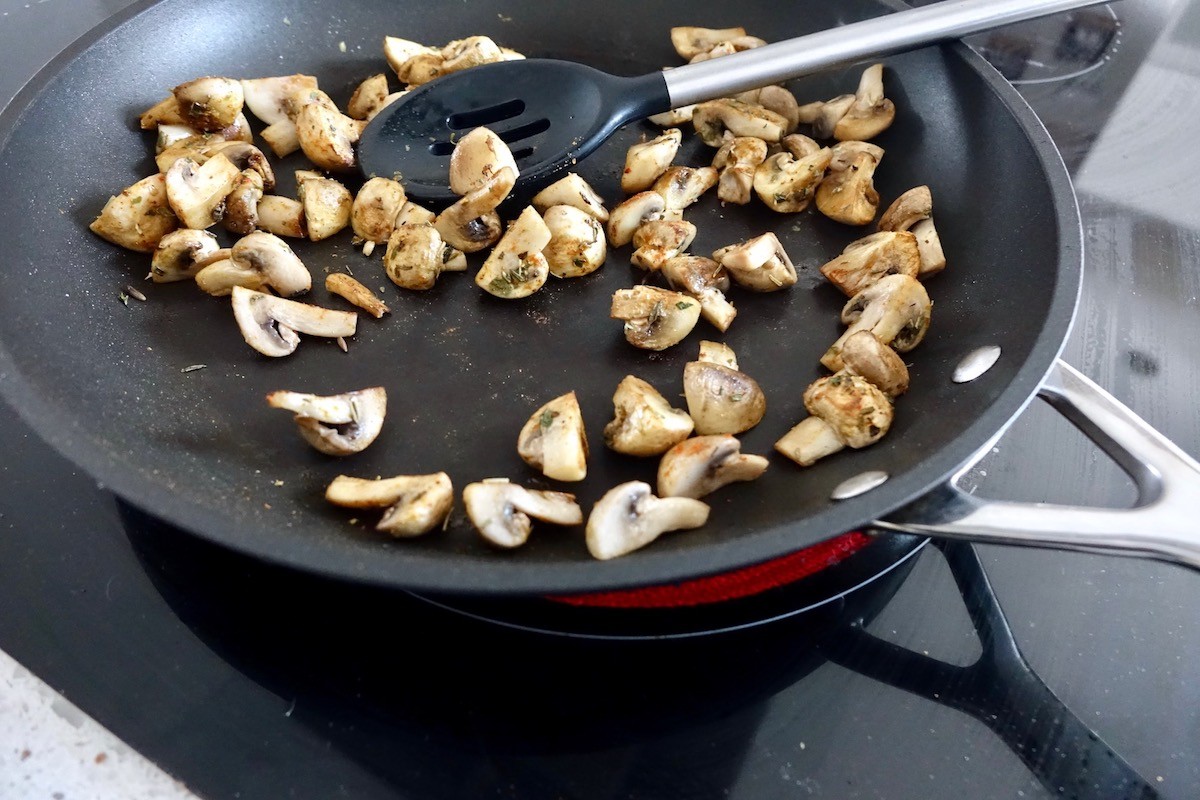 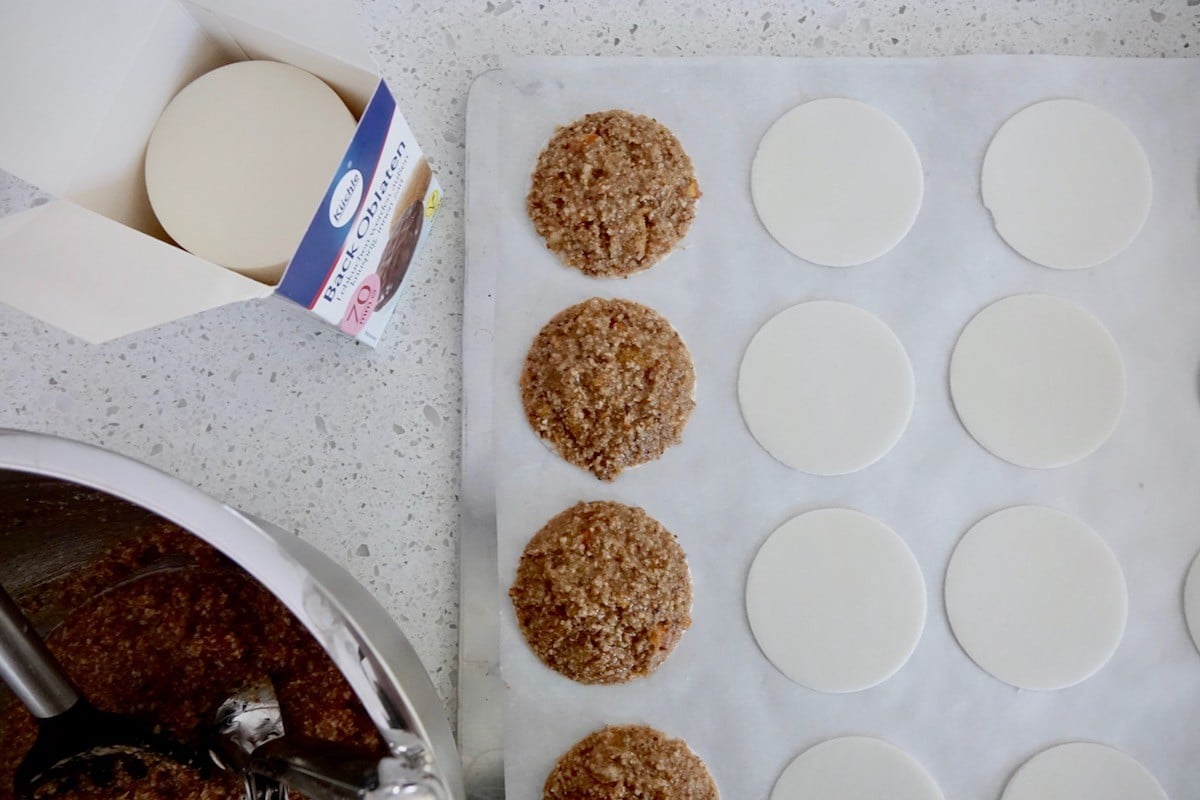 Spekulatius, one of Germany’s most popular cookies, is making its debut on my blog next week in shape of a German cheesecake! Make sure to subscribe to my blog now, so you’re not missing out when this new cake recipe post goes live! 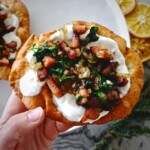 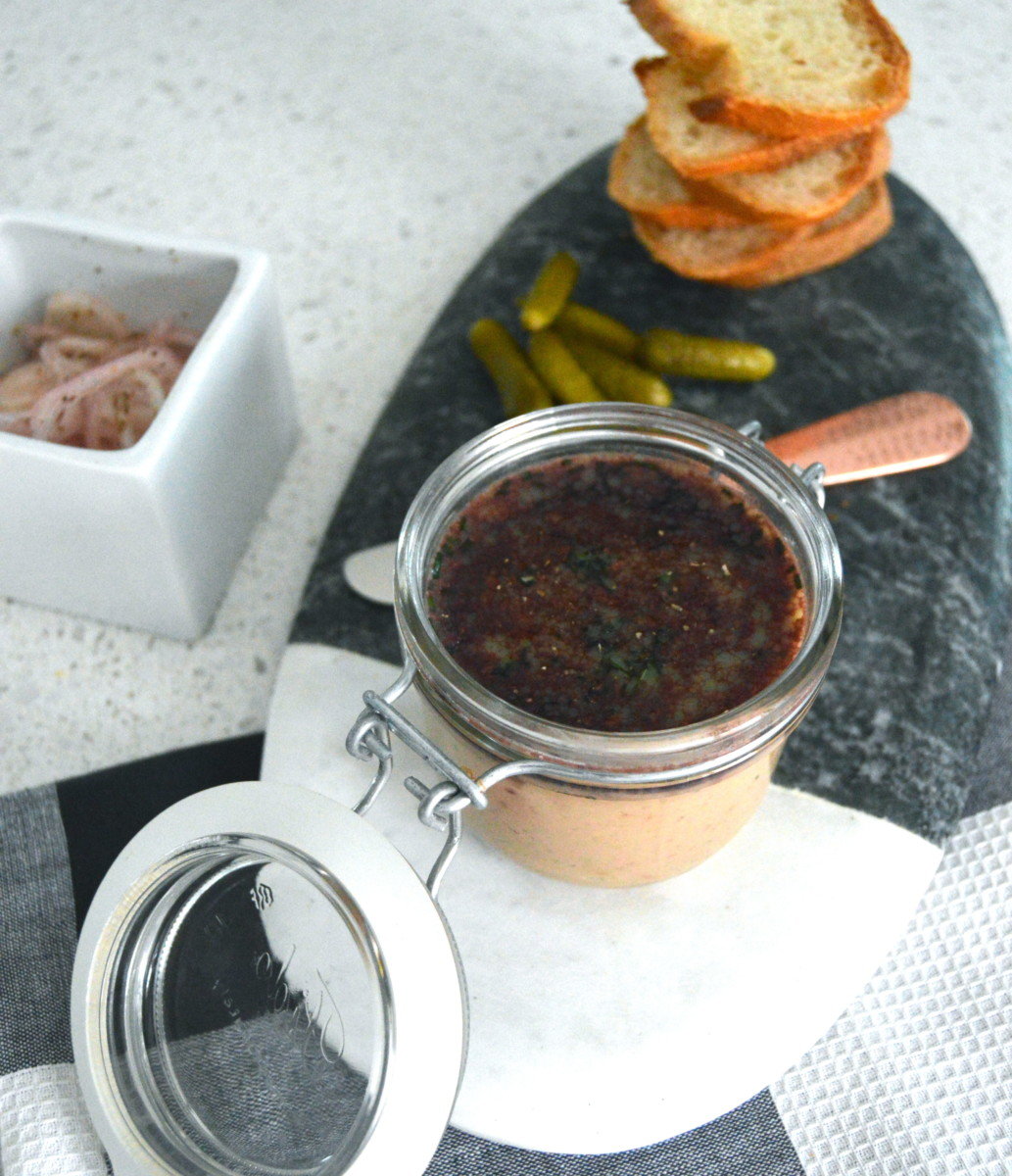 The kind of liver I will eat… 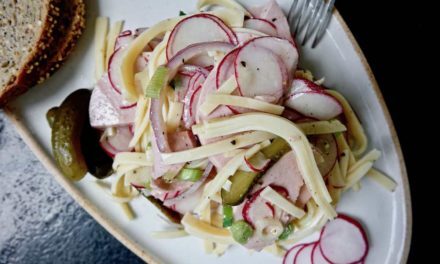 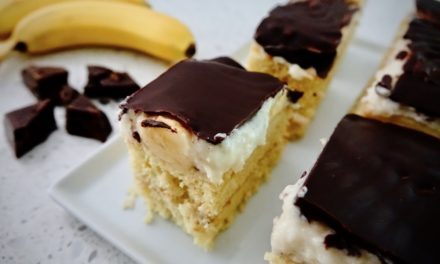