Yeast-raised pumpkin donuts are as addictive as it gets! The donuts are fluffy on the inside, while having a light crunch on the outside. I get rave reviews every time I make them! Since this is a traditional German recipe, I am also calling them Berliners (what filled donuts without a hole are called in Germany), and YOU WILL need to make my classic German Berliner donuts next!

These pumpkin donuts have pumpkin in the batter and local pumpkin butter in the filling. Rolling them in cinnamon sugar is the final touch that makes them irresistible and perfect. Pumpkin Berliner are perfect for celebrating the start of Fastnacht season (German carnival) on November 11th, Friends- and Thanksgiving or just because to enjoy with a cup of coffee.

How to make pumpkin donuts

I personally don't love cake donuts, and all pumpkin donuts I have had in the USA were cake donuts. So I put myself on a mission to make a yeast-raised pumpkin donut and I SUCCEEDED! I love the fluffy texture of the inside of this pumpkin donut, combined with the crunchy sugar coating on the outside.

These donuts are deep-fried (I don't have a deep fryer at home, so I include my simple frying instructions in the recipe card below), then rolled in cinnamon sugar while still hot and finally filling them with a locally sourced pumpkin butter. I get RAVE REVIEWS about these every time I make them!

Donuts during carnival season in Germany

Just when you thought you had seen enough pumpkin for the season, along comes this yeast-raised pumpkin donut recipe just in time for the start of Fastnacht season, the German carnival. This is a traditional German Krapfen or Berliner recipe and they are THE sweet treat during Fastnacht in Germany. They are one of my favorite German bakery items! During carnival, they appear as a classic donut with different fillings, usually jam. To be honest, I can't say I have ever seen a pumpkin version in Germany, BUT I LOVE IT! I enjoy mine with a cup of coffee in the morning or afternoon.

Here the simple few ingredients needed to make your own pumpkin donuts at home.

Here a quick video showing you just how easy and how beautiful these pumpkin donuts are! 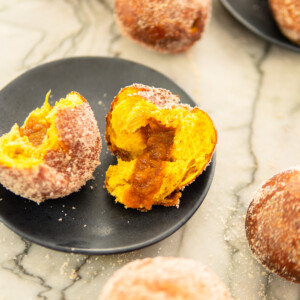 Yeast-raised pumpkin donuts are as addictive as it gets! The donuts are fluffy on the inside, while having a light crunch on the outside. Since this is a traditional German recipe, I am also calling them Berliners (what filled donuts without a hole are called in Germany), and YOU WILL need to make my classic German Berliner donuts next!
5 from 4 votes
Print Recipe Pin Recipe
Prep Time 10 mins
Cook Time 10 mins
Resting Time 1 hr 30 mins
Total Time 1 hr 50 mins
Course Breakfast, Brunch, Coffee, Dessert, Kaffee
Cuisine German
Servings 12 donuts
Calories 340 kcal